Forget Gold or Bitcoin: Cronut Futures Are The Future

- December 18, 2013
I've never had a cronut, to begin with. Full disclosure: I'm pretty pissed off about this. But no matter. The cronut might be delicious, but that's incidental. There's money in cronuts, and not in the paltry, $5 over-the-counter price. Like any rare commodity, the cronut is ripe for speculation, and I want in. The cronut, for the uninitiated, is the bakery industry's version of the iPhone: nothing looked anything like it before, and now everyone wants to get into the act . To aficionados, the cronut is nothing less than the perfect union of a croissant and a donut and — based on drooling reviews — quite a bit more. If only there were more. ( Read the full post on LinkedIn )
Post a Comment
Read more

- February 22, 2013
For as long as I can remember I have always wanted a "better" computer — smaller, more powerful, better features, etc. And it's been easy to chase improvements because tech tends to decline in price, year over year. Two decades ago my first home desktop computer "system" (yes, it was a "system") set me back about $2,200 and was probably less powerful (and certainly less portable) than my iPhone. Two months ago my daughter and I built a high-end gaming PC for about $1,300 -- and that tower can launch missiles. Maybe it's part of the maturation process (mine, not technology) or maybe it's because I've become a cheapskate, or maybe because it's clearer now after years of using computers that I actually know what I do 90% of the time and am not as motivated by pay for cachet over function (this might be the time to mention that my newest car is 13 years old). Whatever the reasons, these days I think less is more. (Read the full pos
Post a Comment
Read more

The Real 'Story' of the Fiscal Cliff

- January 02, 2013
The Fiscal Cliff story has been a thriller, every bit as dramatic as those Cold War spy stories sadly nobody can get away with anymore. Stop me if you've heard this before: The players are polar opposites, circling each other nervously in a delicate balance of terror — and yet they must work (or at least live) together to save the world! Things are always coming down to the wire. The political angles are so numerous and acute you actually believe up is down and black is white. If the stakes weren't so high (and the apparent outcome of what is now Phase I of this particular sage so unsatisfactory) it would be a great story. But we are so addicted to "great" stories — stories that have familiar touchstones — that sometimes the real story gets ignored. You know, the one that could have changed everything. The Fiscal Cliff story was an unnecessary story — a sideshow. I don't think the media machine is ginning up the prospect of economic disasters just to sell newspa
Post a Comment
Read more

- December 20, 2012
I've done a couple of posts this week on Instagram, and one TV appearance, on CNBC's "Closing Bell" (clip above). In my weekly Reuters column I argue that Instagram has to reverse course, and quickly. In a blog post on LinkedIn , I describe the controversy as big messaging blunder who's best (and least likely) explanation is that it was rookie mistake.
Post a Comment
Read more

What We Can't Learn from The Daily's Demise 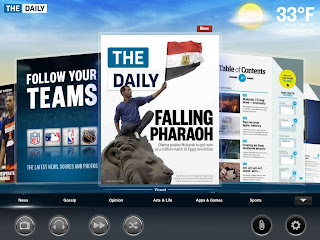 I come to neither praise nor bury The Daily , News Corp's iPad-only news app experiment that will end with a whimper in two weeks . But let's be clear on what went wrong — and what didn't.  As Wired's business editor at the time The Daily was announced I decided to cover it as a big event — the coming out party literally was a big event for News Corp, which threw a press conference that seemed to try too hard anoint it as a golden child from inception. When you use phrases like "digital renaissance” and assert that "We believe The Daily will be the model for the way stories are told and consumed,” you are setting yourself up for quite a fall. My own initial impression, for a formal Wired review , was that The Daily was "very good" — 7/10. I admired the "cover flow" approach to displaying content and likened the publication to a "re-imagined digital magazine that is updated every day." I praised the co
Post a Comment
Read more

Back in June, when Microsoft's Surface was announced, I wrote a Reuters MediaFile column  arguing that it really wasn't a tablet at all. It was a hybrid at best, I said, really going after a piece of the the ultralight market. The target wasn't Apple's iPad — but its MacBook Air. An ARM-based version of the Surface has been out for about a month . It goes for $500 — same as an entry-level iPad. It's really more like $630 because you do want that cover/keyboard, and the cheaper "touch" one looks cheap compared to the "type" version, and it's only $10 less. While Apple shows people touching the iPad screen Surface's print and TV ads for all tout the cover and the kickstand — terrestrial, not mobile features. Five weeks after launch Surface hasn't made a dent in iPad sales. CEO Ballmer said earlier this month that sales were modest, and that was on purpose . But the big shoe drop was always going to be how much Microsoft
Post a Comment
Read more

One of the oldest tropes in marketing is that the consumer owns the brand. It's nice shorthand for customer passion: It's why New Coke had to go, why the Gap had to reverse course on their logo change and why the Twinkie may actually last forever after all. Companies own their brands, of course, in every literal and legal sense. But most of them know that if they act imperiously with their property they risk losing customers, and worse — their best customers can turn into motivated, evangelical enemies overnight. But what if the product is a service that treats you like a product? Where are your alliances — and what are your rights — in that mind-exploding scenario? ( Full Post )
Post a Comment
Read more
More posts